When our disabled athletes walk or wheel into their classrooms, and they say they are hockey players, it makes their able-bodied friends look at them differently, it makes their parents look at them differently, and it makes them think about themselves differently.  We are increasing independence, developing self-esteem,  and growing self-confidence through something as simple as playing sports.  In addition, we are exposing them to the teamwork, friendship, competition, and - yes - disappointments too, that lead to a growth of character that comes from playing sport.

We are based in New York City, and have kids from Manhattan, Brooklyn, the Bronx, Queens, Staten Island, Long Island, Westchester and Rockland Counties, and Southern Connecticut.

We started with 8 athletes during the 2012-2013 season and today we have more than 40 disabled skaters in the program.

Starting with the 2014-2015 season, we have divided up into three teams that we have labeled "Red", "Green", and "Orange", and we have created our very own New York City Sled Hockey League.  Each week, two of the teams plays a competitive game, while the third team holds a practice.  We also have a travel team for the most competitive of our athletes, and they go further away to tournaments.

We are committed to covering 100% of the costs for any athlete who wants to play, and we are determined to introduce even more kids to the great sport of sled hockey.

The WSF NY Sled Rangers is actively looking for children to participate on their sled hockey team.   It is our goal to have 100 or more hockey players in the near term. 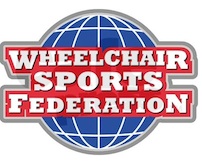 The Wheelchair Sports Federation is a national non-profit that provides opportunities for disabled adults and youth to play sports recreationally and competitively.

The WSF is one of the first organizations to provide adaptive athletes with the opportunity to participate in a multitude of adaptive sports.

The WSF can trace its birth to the adaptive sports programs created at the Eastern Paralyzed Veterans Association in NYC.

More information can be found here.

Sled hockey is an exciting ice sport that allows individuals with disabilities to enjoy the great sport of hockey. It is very similar to “stand-up hockey” in terms of concept and rules. The main difference is that instead of standing up to skate, participants sit on their skates using an adaptive device known as a sled, which is affixed with two skate blades and a runner in the front to form a tripod. The other main difference is that in sled hockey, participants use two shortened hockey sticks with a blade on one end and a pick (similar to the end of a figure skate) on the other end, which enables them to propel themselves across the ice much like in cross country skiing. Hard checking, elevated puck shooting, and 60-mile an hour slap shots are as much a part of sled hockey as they are in “stand-up” hockey.

Anyone with a disability that would prevent them from participating in “stand-up hockey” is a candidate for sled hockey. It is a sport that allows players with mobility limitations (amputees, and able-bodied people with knee, leg or hip injuries) to play, and requires great upper-body strength, balance, and the ability to handle the puck. Even able-bodied individuals enjoy the sport of sled hockey, but are generally at a disadvantage due to the superior upper body strength of a wheelchair user. Typical athletes have spinal cord injuries, neurological disorders such as CP or spina bifidia, loss of one or both legs, or otherwise generically unable to or have difficulty walking.

Sled hockey, or sledge hockey, as it is referred to outside of the United States, originated in Sweden in 1940 and has been played in Europe since 1971. Canada soon followed the trend and boasts the largest program in the world. It came to the United States back in 1989 with the first and only national team at the time based in Minnesota. Today, many established programs conduct weekly practices and games throughout the United States. The national governing body of the sport is the United States Sled Hockey Association (USSHA).

Players use the same type of equipment as in “stand-up hockey” with the exception of the skates. For this, they use a sled, which consists of a cushioned seat mounted on a tubular sled that has skate blades and a center pivot underneath. The player sits four inches above the ice and is held into the sled with Velcro® straps. Two shortened hockey sticks are used to handle the puck as well as propel themselves across the ice.

Essentially all of the regular ice hockey rules that have been implemented and enforced in regular ice hockey leagues apply to many ice sledge hockey leagues around the world. The differences that have been created into the game of ice sledge hockey are modified for the athlete and their sledges. The first set of international rules was created in 1990 and was drafted from Canadian rules. The entranceways to the players’ benches and penalty benches from the ice are designed evenly with the ice so the players can access them without the help of a coach or able-bodied person. Additionally, the surface area inside the players’ benches and penalty benches are made of smooth plastic or ice, which is to avoid any damage to the players’ sledges.

All players are required to have their ice sledge hockey equipment follow the standard that has been set by the IHEC (Ice Hockey Executive Committee), including their sledges, sticks, helmet, skates (if applicable), and other protective gear. The sticks for ice sledge hockey players have a curved blade (similar to regular ice hockey) at one end, and generally six to eight picks at the opposite end of the blade for maneuvering and propulsion. Movement is achieved by using the metal teeth as a means to grip the ice and push one forward. The metal picks cannot be overly pointy and protrude farther than 1cm beyond the stick so it cannot damage the ice or other players.  The rules of sled hockey are essentially the same as in able-bodied ice hockey; the only rule difference is the prohibition of “Teeing”, which is ramming an opponent using any part of the front radius of the sled.